10 Ways to Incorporate Jane Austen-Inspired Style into Your Home

Furniture, fabric, and design choices can bring Regency elegance or rustic charm to any interior

When Jane Austen’s novel Sense and Sensibility was first published in 1811, there were no skyscrapers in London, no London Underground trains, no cars, and certainly no noisy jets overhead. Yet even back then, busy Londoners craved a respite from the pace of city life in that most English of retreats, the country cottage. Though he’s a self-important and somewhat silly character in Sense and Sensibility, Robert Ferrars describes the allure of a small country home rather poetically:

“I am excessively fond of a cottage; there is always so much comfort, so much elegance about them. And I protest, if I had any money to spare, I should buy a little land and build one myself, within a short distance of London, where I might drive myself down at any time, and collect a few friends about me and be happy. I advise everybody who is going to build, to build a cottage.”

And though the world has changed in ways Jane Austen could never have imagined in the early 19th century, the charm of the English country cottage (and its counterparts elsewhere in the world) remains as appealing as ever. For those who don’t have access to such a refuge, however, a few clever touches can lend an air of cottage charm to any sanctuary, even one in the city.

Jane Austen’s heroines, like Austen herself, tended to be voracious readers, in part because they were attracted to the world of ideas, and because they craved the solitude that comes with escaping into a great book. Austen would probably agree that nothing is quite as cozy as a reading nook. Like traditional Dutch cupboard beds that have their own small lighting fixtures and tiny bookshelves, a reading nook, especially one separated from a larger living space by a screen or half-wall, provides the perfect place to curl up with a favorite novel. Nooks can be fitted into a larger room or even a hallway if the proportions are right.  An antique screen, such as this 19th-century Japanese example could be used to create a temporary reading area in a larger space. Window nooks are a natural fit for homes in which the windows have deep sills and tranquil views. With custom cushions in a pretty floral fabric, the right shelving, and room for a teacup, a window seat can be transformed into an afternoon literary hideaway.

In Jane Austen’s lifetime, dyes were costly and pigments were not colorfast. For these reasons, less pigment was generally used to dye fabric, and fabric colors faded more easily in the sun and after repeated washings. While the colors of today’s clothing and upholstery can be as bright and saturated as those of a parrot’s feathers, hues were much more muted in the early 19th century. As a result, Austen’s world had a softer look, with upholstery and clothing more likely to appear light gray, lavender, pink, pale yellow, or pale blue. The use of pastel colors for fabric and paint can give a 21st-century interior the gauzy look of a Regency-era parlor, and such soft tones can also provide a visual foil for works of art or antiques with more vivid hues.

Spend an afternoon gazing at early 19th-century portraits in a museum or enjoying a Jane Austen movie marathon, and suddenly the modern world begins to look naked without its ruffles. Gathered fabric, decorative fringes, and lace trim were de rigueur in both men’s and women’s fashion at various points in the 18th and 19th centuries. Dresses were adorned with rows of ruffles, women sported gathered caps tied with ribbons, and even windows were decorated with voluminous drapes and curtains gathered on either side for a rippled effect. Ruffles instantly telegraph a kind of light-hearted femininity and lend a warm and inviting quality to an interior. A ruffled table skirt, ruffled trim along the edges of a decorative pillow, or gathered upholstery used to create a ruffled look on furniture can help evoke the whimsy and charm of an Austen-era room.

Though the glamour of London plays a role in some of Jane Austen’s novels, most of the action takes place in the countryside. A sure way to bring a touch of rural life into an interior is to add some rustic antique furniture or a new item fashioned from vintage or reclaimed wood. Antique pieces like a small writing desk in a home office or a farm table in a kitchen can transform a room, connecting the present with a real piece of the past. At the same time, reclaimed wood from architectural salvage can be used in contemporary creations that effectively offer an aesthetic tip of the hat to an earlier time.

Wallpaper can be traced as far back as ancient China, but it was not until the 18th century that the industry began to flourish in Europe. By Jane Austen’s day, scenic wallpaper had come into vogue, and panoramas depicting the exotic locales of famous explorers’ travels, such as Captain Cook’s voyages to the South Pacific, became wildly popular. Wallpaper also commonly depicted pastoral scenes or floral or geometric patterns that complemented the furniture and interiors of the Regency period.

Whether an interior is painted or wallpapered, a simple way to create a country cottage aesthetic is to paint trim and wainscoting white or light gray. A darker color, like navy blue or charcoal, can make this traditional detail chic for a city residence, too.

The English perfected the art of the formal garden. At every scale, from the modest hedgerows of London suburbs to the Hampton Court maze, gardens provide a place to walk, talk, think, and daydream. The simple acts of enjoying a garden itself or planting and tending flowers and shrubs offer time-honored ways to clear the mind.

Upholstery was rarely tufted in Austen’s day, but the vogue for luxurious fabrics like silk and velvet made Regency furniture practically glow in the light. Velvet in a solid jewel tone or a woven fabric with a pattern inspired by the architecture of Ancient Greece and Rome would be entirely appropriate in an Austen-style interior. From the 18th century onward, floral fabrics known as chintz became enormously popular in Europe. Printed in India, they bore European botanical and floral designs loosely derived from Indian patterns and were typically printed in several colors on a light background. Chintz fabric would find its way into high fashion and interiors and was even adapted as decoration for ceramics. The look of printed florals is still evocative of the heyday of English chintz, and many of the world’s top weavers produce fabrics today that are based on designs from the 18th and 19th centuries. This pair of Louis XV chaises and tabouret are upholstered in a cool, light green silk with a lush floral pattern, ideal for an Austen-inspired interior palette of light hues.

Some of the best domestic rituals haven’t really changed much since Austen’s day. One of the simplest ways to add a touch of Regency elegance to a contemporary space while entertaining is with a selection of decorative antique silver and china.This exquisite teapot from 1725 is a very early example of Meissen porcelain, and its gilt surface decoration depicts a scene of figures in a bucolic landscape—a quintessentially Austenian scene. A set of antique dessert plates with a delicate floral pattern or hand-worked lace napkins would add a lovely touch to an afternoon tea, too.

The ultimate Austen-inspired interior decorating element is a well-stocked library. And there is no need to limit a collection of books to a single room. Rare books, first editions, and well-loved novels can be displayed anywhere a reader might enjoy having them close at hand.
Read More on Interiors & Design
March 14, 2016September 28, 2018 Christie's International Real Estate 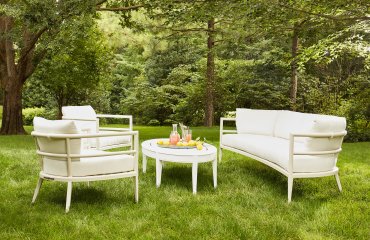 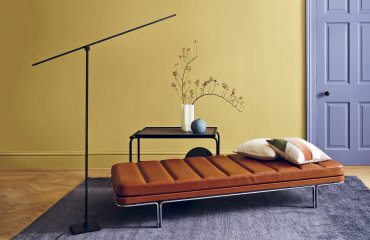 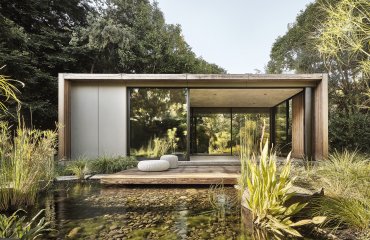