Built to Last: The Rise of Metal Architecture

Hard-wearing metals such as steel, aluminum, and copper are proving an evergreen and versatile choice for today’s innovative architects

Ever since the Chrysler Building’s iconic sunburst-patterned, stainless-steel spire first pierced the Manhattan skyline in 1930, architects have been fascinated by the potential for metal to be deployed as cladding material.

It has been used for buildings since the Industrial Revolution, when iron production soared, but it wasn’t until the early 20th century, when architects began working with steel, that things got really interesting.

Some of the very first skyscrapers, including Chicago’s Home Insurance Building of 1885, used steel structures for strength and to allow rapid construction. This practice has never gone out of fashion: witness the hybrid concrete and steel of New York’s One World Trade Center. It wasn’t until the development of curtain-wall systems, however, that we began to see buildings wrapped in aluminum or stainless steel.

Related: Discover Why Concrete Homes are Back in Style

The most audacious of these has arguably been achieved by celebrated Canadian-American architect Frank Gehry. His buildings, with their swirling complex forms, ambitiously celebrate the design possibilities of metal—the most influential of these being Guggenheim Museum Bilbao, built in 1997. Sheathed in 42,875 panels of dazzling titanium, which bend and ripple like drapery folds on a sculpture, it is an explicit demonstration of art influencing architecture.

Gehry’s equally striking Walt Disney Concert Hall in Los Angeles, from 2003, features an exterior clad in reflective stainless steel of undulating and angled forms. The malleable characteristics of its thin metal panels enabled a more adventurous curvature in the building. Stainless steel was also used for Gehry’s 76-story residential skyscraper, 8 Spruce Street in New York City. The cladding’s rumpled skin, composed of 10,500 stainless-steel panels, almost all of which are individually shaped, creates a constantly shifting appearance.
A similar free-form structure, clad in stainless-steel shingles, has been achieved by Austrian architecture firm Coop Himmelb(l)au. House of Bread II in Asten is a museum and exhibition space that comprises a swirling amorphous blob of steel resembling a loaf of bread, sitting atop a box-shaped concrete plinth.

Protection from the elements
But metal is not just reserved for skyscrapers and high-profile museums. Architects have fallen in love with the material’s qualities, employing Cor-ten (weathered) steel, copper, aluminum, and zinc in private residences.

Copper can be used not only for its unique aesthetic qualities, but also because it weathers well in salty locations, and over time, the material will develop an attractive green patina. One architect who appreciates copper is Washington, DC-based Robert M Gurney. A folded copper roof and wall was used for his Buisson Residence in Virginia. Gurney specified copper for the building, which is situated on a grass-topped hill with unspoiled views of Lake Anna, because it’s durable, timeless, and complements other materials.

“A lot of our work is on the Atlantic coast of the United States where there can be extreme temperatures alongside a water environment,” says Gurney. “Metal performs well in these conditions and isn’t high maintenance. The material is always more expensive, but you’re trading off long-term maintenance costs for a higher price upfront.”


Related: Find Out Why Architects Are Going Back to Brick

Further afield, on the south coast of New South Wales, Australia, a series of angular, black aluminum-clad volumes, each with its own window at the end, projects out towards the sea. Headland House, a private residence, sits on a prominent site, its exposure and proximity to the ocean the key factors for Sydney-based architect Andy Carson’s choice of building material.

“We wanted the cladding to be black in color so that the house receded into the landscape. Seen from a distance, it almost looks like a patch of vegetation on the hill,” says Carson. “I use metal again and again for cladding as it’s infinitely recyclable,” he adds. “I love the visual mass and the control you have; you can vary its look because it can be easily manipulated.”

Canada-based Alain Carle Architecte also chose black aluminum for True North, a private home in rural Ontario. The site is exposed to humid conditions and strong winds from the water surroundings, so the material’s low maintenance demands were a deciding factor.

Faulkner Architects’ superb Miner Road house, located at the base of the Oakland Hills, outside San Francisco, and nestled among mature Californian oaks, vast sheets of Cor-ten steel sheathe the exterior walls.


“We frequently use Cor-ten on our projects—it will never go out of fashion. It’s a live material that oxidizes and has an earthy redness and unevenness that cannot be produced artificially,” says architect Greg Faulkner. “We wanted a material that changes with the atmospheric conditions. These rusting masses of steel refresh every time it rains, just like the landscape.”

Abramson Teiger Architects’ Wyoming residence, with its spectacular views of the Teton mountain range. Again, the appeal was in the material’s unique weathering qualities, robustness, and the fact that the color will change over time.

Faulkner adds that the only downside of Cor-ten is that it doesn’t perform well near the ocean. Zinc, stainless steel, copper, and bronze are more resistant to corrosion and are therefore better suited to salty environments. Cor-ten is good in a stable, less humid climate, providing it is installed correctly and well ventilated.


“Metal is attractive because it’s impervious to fire and weather, it’s also durable, and it will last,” says the architect. “If an active surface like Cor-ten, copper, or zinc is used, the material takes on the effects of the environment, giving the building a strong connection to its place.”
Discover More Articles About Architecture
August 29, 2018December 6, 2018 Amanda Birch
Christie's International Real Estate 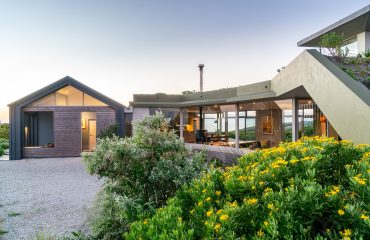 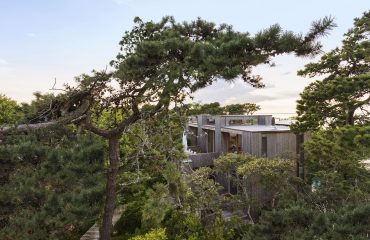 Growing Home: The Trees Making a Statement in Top Architecture