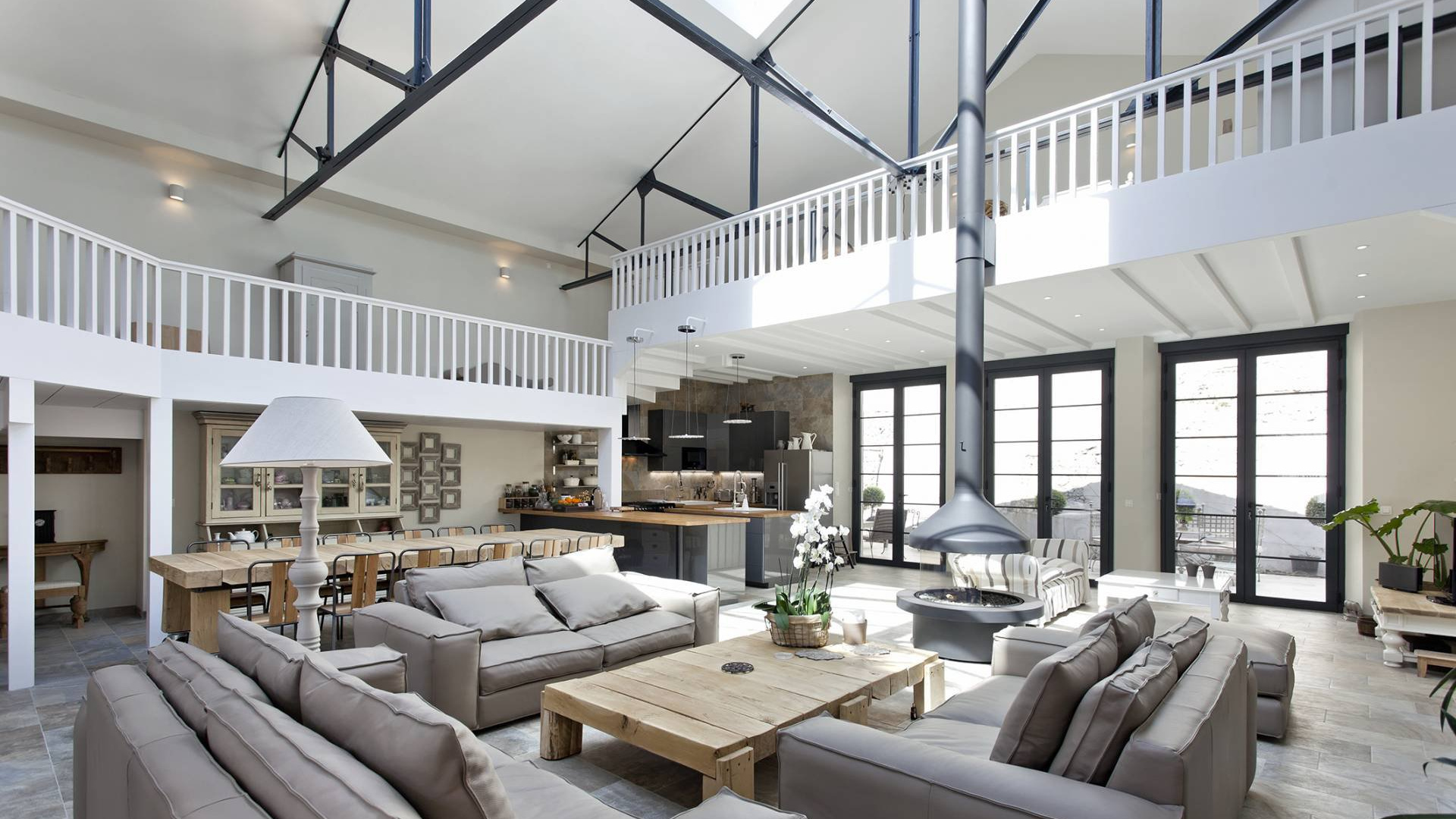 Thank the starving artist and the Industrial Revolution for the expansive, light-filled, luxury loft. After the 19th century’s factories, warehouses, garment and print shops moved out, the artists moved in. They saw the potential of a vast live-work space in the urban environs of SoHo and Tribeca. These pioneers included Andy Warhol, Jackson Pollock, and William de Kooning, and over the next few decades, loft conversion boomed. Then, as now, the quintessential loft apartment is an airy, open-plan space with an industrial-chic aesthetic, wood floors, exposed brick, columns and beams, high ceilings, and monumental windows looking onto cobblestone streets below. Where the bohemians went, their friends and patrons followed. Thus loft living has moved beyond Manhattan and its outer boroughs to urban streetscapes far afield in France, the Netherlands, and Thailand—as this collection of luxury homes gloriously will attest.

Just off West Broadway in the heart of Tribeca, this 3,000-square-foot, full-floor loft has a prime location in 10 White Street, a five-story cast iron building built in 1870 and converted in 1983. A keyed elevator entry whisks residents up to the airy, open interiors by Solomonoff Architecture Studio. Four 9- by 5-foot south-facing windows and Corinthian columns grace the 40-foot-wide exterior. Inside are 12-foot-high ceilings clad in original painted tin, wide plank floors, and original steel shutters on the bedroom windows. The space is perfect for grand entertaining, or quiet lounging and home-cooked dining. The roof deck is a crowning touch for this classic Tribeca loft.

Related: Read A Neighborhood Guide to Living Like a Local in Tribeca, New York City

This loft has a rather unique setting on the French Riviera, near Cannes’ famed beaches and Promenade de la Croisette. Perched on a high floor, the residence is presented in mint condition with refined interior décor. The open-concept interiors have floor-to-ceiling windows, which bring in the light and the views. The centerpiece is a vast, two-story living room anchored by a spectacular suspended fireplace. The space incorporates the kitchen, a chef’s delight with top-of-the-line appliances, a breakfast bar, and center island. French doors open to the terrace. The private quarters, four bedrooms with spa-like bathrooms, including a principal suite, are equally luxurious. The property also boasts a separate apartment with a living room, kitchen, and bedroom with shower room, as well as three outdoor parking spaces.

Glamour shimmers from this loft-style residence in Monaco’s Golden Triangle, steps from the Hotel de Paris and the Casino Monte-Carlo. Walls of glass frame the views of Monaco harbor, the Palace of the Principality—and a bird’s-eye view of the Monaco Grand Prix from the living room or the grand terrasse. The vistas from the dining room give the impression of dining aboard an ocean liner moored in the harbor. The primary bedroom, its adjoining bathroom, and an office all have the same harbor views, while a guest suite overlooks a pretty park. Three large parking spaces are also included in this lavish residence, within walking distance of all the principality’s hot spots.

This impeccable, architecturally renovated SoHo-Greenwich Village loft has a 5,000-square-foot footprint with five bedrooms, four full bathrooms and two half-bathrooms, and 60 linear feet of frontage overlooking LaGuardia Place. The full-floor simplex features a keyed elevator which opens to a 43- by 25-foot great room with 12-foot-high ceilings and oversized, picturesque windows framing tree-top views to the east. The wide open dining room and double living rooms have warm oak floors, custom lighting, original columns, and five-zone central air conditioning. The primary suite has a stately gallery, dual, custom-fitted walk-in closets, and an en suite Carrera marble bathroom featuring an Italian tub carved from a solid piece of marble. Heated marble floors in each of the other four bedrooms. A classic La Cornue kitchen, in cobalt blue, a media lounge area, and a laundry room with half bathroom are further highlights. The building has both freight and passenger elevators and is a stone’s throw from Washington Square Park and two blocks to SoHo.

This unique loft dwelling is in Bangkok’s bustling Sathon district, minutes from the city’s CBD. Built from a concrete shell, the interiors feature 23-foot-high ceilings and full-height windows to maximize light and air flow throughout. At each end of the main living area, French doors open to large terraces, bringing in the breeze and the spectacular city views. The living spaces include four en suite bedrooms, a dining area and contemporary kitchen, family room, study, utility room, and separate staff quarters. One of Thailand’s high-end condominium developments, Windshell Naradhiwas offers 36 units that combine the size and function of a house with the facilities and convenience of a city center apartment. Building amenities include a rooftop pool, professional gym, and open-air entertainment area.

The loft aesthetic meets the 21st century at this duplex penthouse in the port city of Rotterdam. The residence is on the 13th and 14th floors of the Timmerhuis building, a striking modular high-rise designed by OMA Architects. In addition to 4,069 interior square feet are two terraces, each measuring 484 square feet. Walls of glass frame the cityscape and flood the space with light. The open living room has separate library and media spaces. An elevator rises to the private, 14th-floor entrance, where a cloakroom and powder room receive the visitor. Beyond, a chef’s kitchen with high-end appliances also serves a second dining area. The office has a lounge. The private quarters comprise two bedrooms. The principal suite has two bathrooms and a dressing room so large it could serve as a third bedroom. The home has access to building amenities and two secure parking spaces.

This former photo studio near Place du Trocadéro in the heart of Paris has been transformed into the ultimate duplex loft. The elegant light-filled residence was renovated throughout while preserving the original features: wood floors, gallery walls, and a vast skylight crowning the entire ceiling. The footprint measures 710 square feet (with 602.7 square feet of living space). An entrance hall leads to a reception room, kitchen, and dining area. The first-floor also includes a shower room and a large walk-in closet. The mezzanine bedroom is a private retreat overlooking the living room. 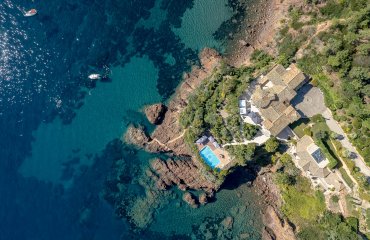 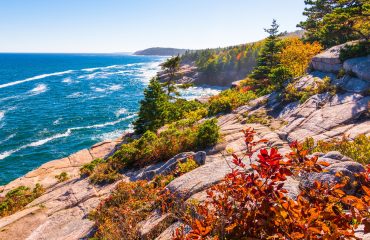 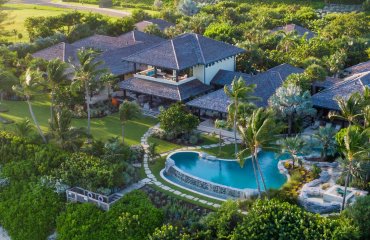