Each year, the Monaco Yacht Show gives sailing lovers a taste of luxurious things that are on the horizon – and the Principality is determined to do so for years to come

Nothing says luxury, grandeur and decadence more than spending a week or two aboard one of the finest yachts available, and each year, in celebration of this multi billion-dollar industry, Monaco opens its port for a week-long show.

Sailing aficionados, yacht buyers, brokers and would-be charterers stalk the docks admiring these fine vessels and seeking out the latest gadgets to take on board on their next trip. Monaco has long been the only place to see the future of the superyacht and the yachting lifestyle. However, in recent years, questions have plagued the tiny Principality on whether it is losing its superyacht crown to places such as Ibiza. With limited marina-space and prime real estate in short supply, would-be Monaco visitors have been forced to look elsewhere. However, this year, and in answer to its critics, Monaco has stepped up and announced a €1 billion territory expansion, completing in 2016. Its coastline is set to get an injection of luxury villas, offices and a new harbor all embodying a “Mediterranean ambience”.

Monica de Champfleury of Hammer Draff, Christie’s International Real Estate’s exclusive Monaco-based affiliate, is excited about the plans, “The new extension of Monaco is an important step for the future of the Principality because Monaco is in desperate need of more luxurious accommodations; presently the demand is higher than what the market can offer.” She firmly believes Monaco will not lose out to rival marina towns though.

“Monaco is the only place in the world that offers superyacht owners the following advantages: an elegant and perfectly equipped yacht harbor in the centre of the city with a splendid Yacht Club, major tax advantages, an average of 300 days of sunshine per year, utmost security and a very practical infrastructure that leads to the international airport of Nice in five minutes by helicopter. The Principality is the most exclusive and safest place in the world.”

With this in mind, a new excitement seems to have descended and extended to the Yacht Show following a few turbulent years. According to yacht designer Adam Lay of Adam Lay Studio, “The [superyacht] industry is finding a new level post financial crisis and I’m positive about the future.”

This year the sunshine-drenched show (23-26 September 2015) offers visitors 121 of the world’s finest yachts both in the marina and out at anchor, 52 of which are new to the industry; 16 countries are exhibiting with Italy this year’s top boat builders – with 52 in build for 2015.

Here are our top picks from the show.

Top show yachts
This year, a plethora of yachts enter the market for the first time and it seems sleek and sexy is on trend. The 77m Silver Fast from SilverYachts with her exterior designed by Espen Oeino and the interior by Vain Interiors is long, cool, streamlined and bullet-like; allowing it to reach speeds of nearly 30 knots, and making it the fastest aluminium motor yacht on the market. It is currently available to buy with yacht brokers Burgess with an asking price of €79,500,000.

Next, Tankoa has entered the seas with its first yacht. The 69.3m Russian-owned Suerte boasts an aquarium, a pool with glass bottom, sauna and steam rooms, a wine cellar, dive platforms plus an impressive beach club. Guido Orsi, President of Tankoa Yachts, commented, “Following a turbulent time in the superyacht world, we thought this year was right to launch our first large superyacht. Monaco remains the most important and biggest show of the year and it was critical for us to showcase Suerte here. She will be available to charter at some point in the future, I imagine next season in the Mediterranean.” 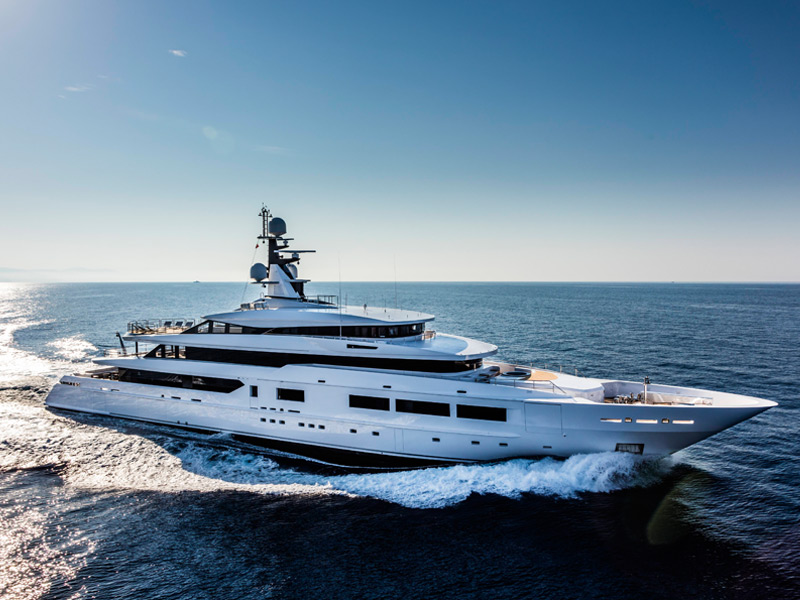 Built in Genoa, Italy by Tankoa Yachts, this stylish superyacht has ample leisure and entertainment facilities including an outdoor bar and sun deck, making it the perfect charter for socializing and parties. Photograph: Tankoa Yachts 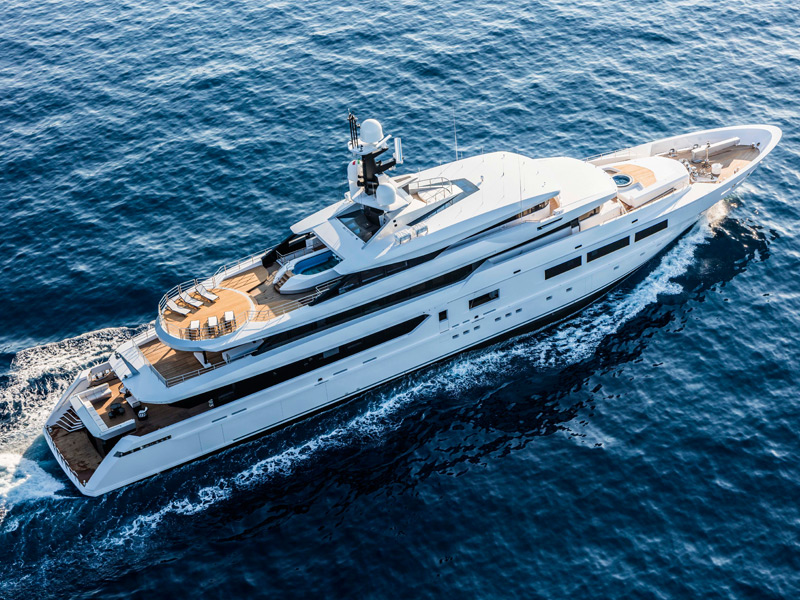 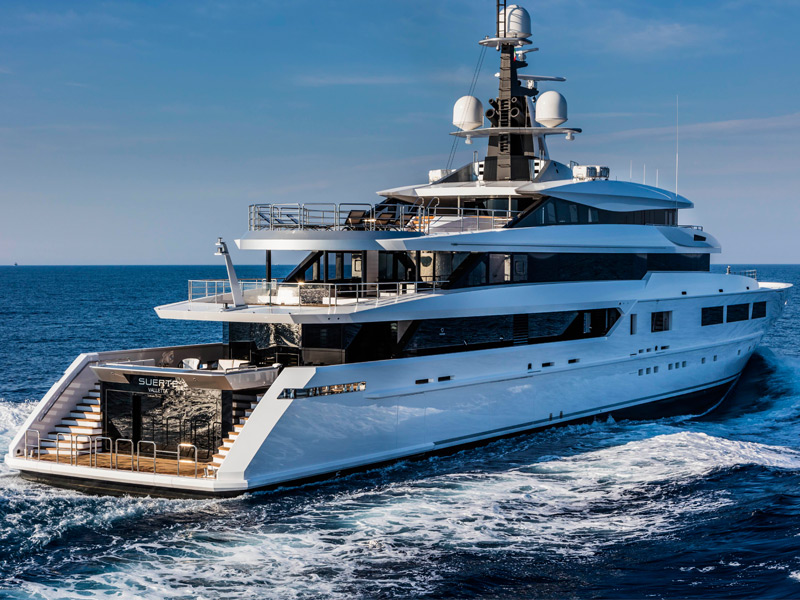 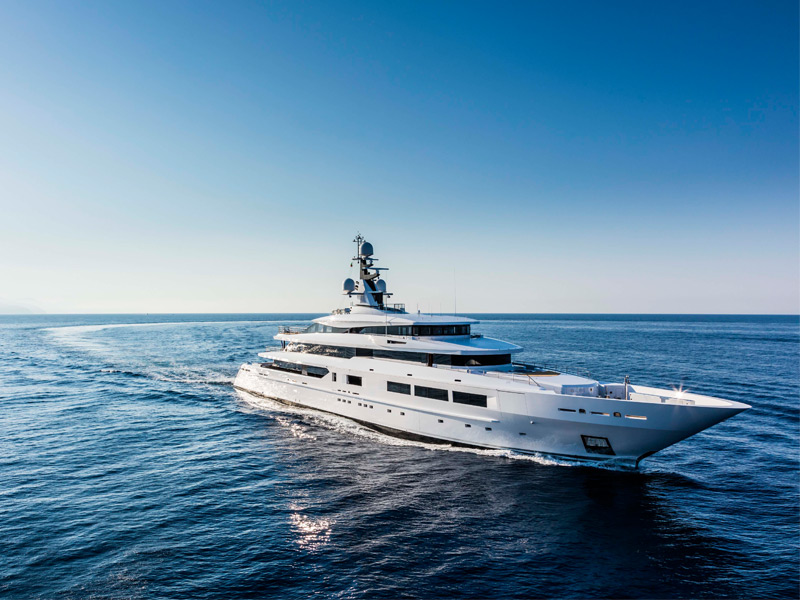 Suerte will be available for charter in the Mediterranean from next season. Photograph: Tankoa Yachts

Must-have toys
With superyacht broker firm Camper & Nicholsons announcing a partnership with Briggs Automotive Company (BAC), following a collaborative effort in building and designing the Mono ‘Marine Edition’, a purpose-built supercar for life on board the world’s premier superyachts, the bar for superyacht toys has been seriously raised. Stepping up first is Seamagine with the biggest of this year’s new submarines, the Aurora-5. Able to hold four passengers (plus a pilot) in a glass capsule allowing for almost a 360° unrestricted view, the Aurora-5 can dive to depths of 330 metres.

Grahame Hawkes from DeepFlight, the man responsible for the first submarine ever featured in a Bond film returns to the Monaco Yacht Show with two super high-tech vessels. Dragon took centre stage though with its claim to the title ‘easiest submarine to pilot’. It is smaller and lighter than the other models on the market and utilizes DeepFlight’s Dive Manager – inbuilt technology that manages most critical functions thus making a pilot unnecessary and allowing anyone to drive the sub with minimal training.

Tender time
The sleek, sexy and almost space-age theme continues with the new tenders brought to market. The real showstopper is the GLIDER SS18. This futuristic-looking tender is currently being built by UK builder Glider Yachts, with new technology allowing it to tune itself into sea conditions so that it glides over waves, reaching speeds of up to 56 knots.

Uniting style with technological excellence, the much-talked about collaboration between watchmaker Franck Muller and Italian shipyard The Italian Sea Group has come to fruition, and what has been created is a 16.5m super-stylish tender named Franck Muller 55. It can reach speeds of 35 knots and has been dubbed the most sophisticated ship-to-shore ride out there.

Without doubt, this year, the 25th edition of the Monaco Yacht Show has delivered an unrivalled schedule of high-end events, world-class superyachts and an exciting line-up of toys and tenders proving Monaco is still the place to be. 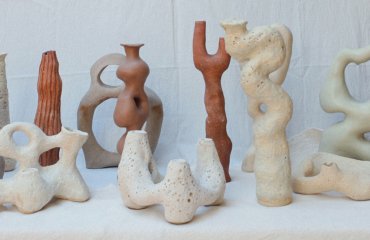 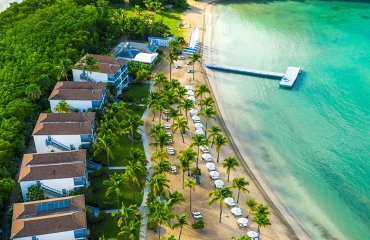 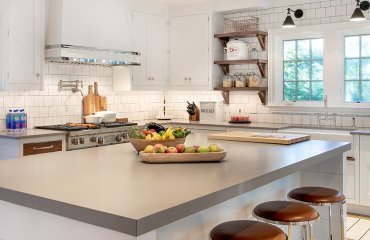