Adaptive Reuse: Is Retrofitting the Future of Architecture?

As COVID-19 restrictions are lifted and the construction industry gears up once again, governments worldwide have been called on to prioritize a green economic recovery—one that combines fiscal growth along with energy efficiency and reduced emissions. Adaptive reuse, the process of retrofitting an existing building with the latest environmental technologies, while conserving resources and historic value, is a clear way for architecture to help establish this new, greener normal.

But it’s not a new solution. Over the last two decades, architectural firms have embraced the idea of transforming industrial structures and older buildings into residential and commercial spaces, with noteworthy successes including Vienna’s Gasometer City, London’s Battersea Power Station, and Zurich’s railroad viaducts.

Today, the benefits of reuse are even more apparent. As the Royal Institute of British Architects (RIBA) pointed out in a recent report, retrofitting existing building stock “is vital to stimulating investment and consumer spending, alongside creating jobs, improving health and well-being, and meeting net zero targets.”

Preserving the Past and Future

“Reusing and retrofitting, rather than building new, is the most impactful way to reduce embodied carbon emissions while accommodating a growing population,” adds architect Edward Mazria. As the founder of Santa Fe-based Architecture 2030, a climate change think tank focused on the built environment, he’s closely watched the shift towards refurbishing buildings.

“Architects and clients are increasingly choosing adaptive reuse,” he explains. “They understand the importance of reducing embodied carbon, and appreciate the benefits of saving and retrofitting existing buildings. They recognize that it preserves not only the historical and aesthetic value of a structure, but the integrity of neighborhoods too. It can also come with financial savings, and allow for an entirely new interior reconfiguration to address the issues that the pandemic has highlighted about our existing spaces.”

One such example is the airy, future-forward San Francisco home of architect Jonathan Feldman. Named The Farm, Feldman’s retrofit honors the charm and history of the original 1905 Edwardian stucture, “while transforming and opening the home’s layout to better flow and connect to the garden, fill it with natural light, and integrate modern building science and cutting-edge sustainable technologies,” he says.

The home’s green credentials are equally impressive. Achieving LEED Platinum, The Farm has both rainwater and gray water reuse systems (cleverly concealed beneath the added deck and used to water the garden and flush toilets), a hydronic radiant-heating system and a heat recovery ventilation system—providing the home with clean air. “Repurposing the existing building also greatly reduced our carbon footprint compared with a new construction,” Feldman adds. “It significantly diverted sending large amounts of material to landfills, and helped to retain the rich history and character of San Francisco.”

Staying true to the character of a historic building was precisely the ethos embraced by Boston-based Hacin + Associates, whose award-winning adaptive reuse project transformed a 19th-century fire station into a light-filled, three-level home.

Located in the National Historic Landmark District of Newport, Rhode Island, the spacious, four-bedroom, three-bath residence served the city as Redwood Hose Station 8 until 1912. Architect David Hacin and his team undertook the contemporary restoration brick-by-brick, as structural issues required dismantling it entirely in order to build a new foundation. “To salvage the original materials, each brick was cleaned and tested for strength by hand, an exhaustive process,” says Hacin. “Similarly, 30 pieces of solid granite capstone were marked and stored off-site.”

In addition to reusing and recycling existing materials, the team incorporated green technologies including a geothermal heating and cooling system. A supplementary single-panel solar system was installed, and minimal electric power was sourced through a local non-profit consumers’ alliance.

“This project captures the ways in which designers can retrofit a utilitarian building to serve the needs of the environment, as well as homebound residents,” says Hacin. “The location of this reuse project in the heart of Newport allows for residents to travel by foot with ease to fulfill daily errands and remain connected to the rest of the world.”

A similarly sensitive restoration, with respectful additions and modern upgrades, can be seen in the Balcones Residence, in Austin, Texas. Situated on a sloping plot, the striking mid-century property was originally designed by revered architect and University of Texas professor Roland Roessner and is characterized by its cantilevered balcony, original brickwork, and mahogany paneling.

Related: Discover the Link Between Architecture and Well-being

“This house was built with classic materials and had great lines to begin with,” says Paul Clayton, principal of Clayton & Little, which led the refurbishment. “The owners wanted to maintain the original feel of the home while upgrading to similar, more refined materials with modern conveniences.”

To improve energy efficiency, the team added insulation along with new double-glazed windows, a high-efficiency HVAC system, and metal ducts for improved air quality and flow. Photovoltaic panels now provide most of the home’s energy, and are concealed on the lovingly restored home’s defining flat roof.

“As architects working within established urban areas, it’s our obligation to reuse what we can and not simply tear down older houses or other buildings capriciously,” says Clayton. “The practice is more environmentally friendly, and the layers of design and time ultimately conspire for a richer experience.”

This 20,451 square-foot (1,900 sq m) property has been completely refurbished and offers the unique opportunity to subdivide it into a mansion home, offices, and condos. On the market with ReMind Group S.A., it offers 31 bedrooms and 43 baths, as well as three ballrooms, a dining room for 100 seated guests, a swimming pool, gym, and large patio garden. 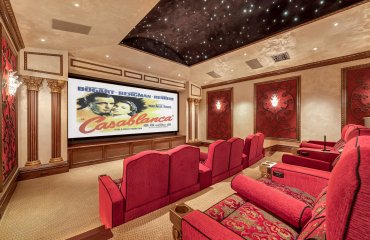 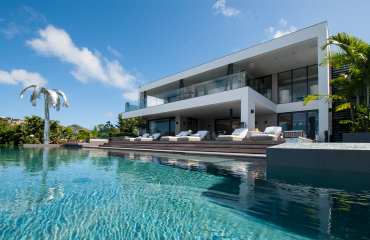 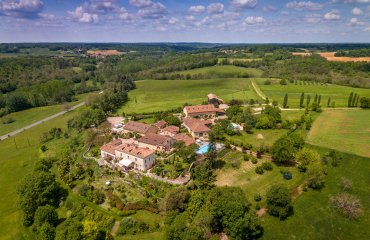